It’s been a blood bath in the broader markets and with Bitcoin specifically.

The cascading effects of the potential insolvency of Celsius—a shady Bitcoin and altcoin lending platform—are weighing heavily on the Bitcoin price. People with Bitcoin on Celsius are no longer able to withdraw.

However, I’d like to emphasize that Celsius—and other companies like it—are not the same as Bitcoin. For example, suppose there was an unscrupulous gold storage company that went insolvent. That wouldn’t mean gold is faulty.

Celsius became infamous for offering people unrealistic “yields” on Bitcoin and other altcoin deposits on their platform. This is an enormous red flag in any investment.

Investors have been starved for yields for years as central banks have artificially suppressed interest rates far below even the crooked official inflation statistics. So, unsurprisingly, some have fallen for the siren call of supposed high-yielding offers.

Here’s the thing, though. If profitable and enduring economic activity does not back up a yield for any investment, it is likely only backed up by the next greater fool. In other words, YOU are the yield for someone else.

This activity was allegedly happening at Celsius… suckering people into an insolvent enterprise with promises of unrealistically high yields.

The potential collapse of Celsius and its ripple effects undoubtedly was a drag on the Bitcoin price recently. But on the bright side, it will help purge the industry of bad actors. It also created a rare opportunity in the market—more on that in a moment.

Lesson #1: “Not Your Keys, Not Your Bitcoin”

If you hold your Bitcoin on Celsius, Coinbase, or some other platform, you don’t really own your Bitcoin. Instead, you own a Bitcoin IOU, which is something very different—as Celsius clients recently discovered.

It’s much more secure to hold your Bitcoin in your own wallet, off the exchange’s website, and where only you control the private keys.

For beginners, I recommend starting with the Muun Wallet for your phone. It’s an excellent choice and is the easiest to use. BlueWallet is a good choice for intermediate users on mobile phones. Finally, Electrum is a great option for laptops and desktops—which are often more secure than a mobile phone.

Whichever wallet you use, ALWAYS ensure that you have properly backed up your wallet. Each wallet is different and will give you instructions on doing the backup. That way, you won’t lose your funds if you lose your phone or laptop. It is crucial to take this step when setting up your wallet because this is the ONLY way to recover your funds if something happens to your device. Bitcoin has no customer service department.

Lesson #2: Stick to Bitcoin Only

Celsius’ deep involvement in altcoins exposed the company to enormous risk. For example, they allegedly were exposed to Terra Luna, a $40 billion altcoin that disintegrated in a matter of hours in May.

Bitcoin and altcoins— all cryptocurrencies other than Bitcoin—are two entirely different things.

First, altcoins are decentralized in name only (DINO). It is trivial for a small group of developers and insiders to change the supply and rules. That’s why altcoins have artificial scarcity and are not genuinely “hard to produce,” which disqualifies them as candidates for good money.

Second, altcoins are not equity and do not represent any ownership stake or claim on any asset whatsoever. That’s why altcoins are akin to frequent flyer miles and arcade tokens.

But suppose altcoins did represent an ownership stake or a claim on an asset. They would then undoubtedly be “securities,” which means their developers must register with the government. (I think the SEC should have been abolished yesterday, but I also think it’s stupid to flaunt them).

I don’t expect the Celsius meltdown to have a lasting negative effect on Bitcoin.

Bitcoin has gone through several more explosive incidents in the past and came out stronger than ever (see Mt. Gox’s bankruptcy in 2014, for example).

That’s because Bitcoin is a superior form of money in the earliest stages of monetization—an inherently volatile process.

It is not uncommon for Bitcoin to have significant corrections of 50% or more, which has happened eight times. Further, there have been three occasions where Bitcoin has declined 80% or more.

The recent volatility is par for the course. 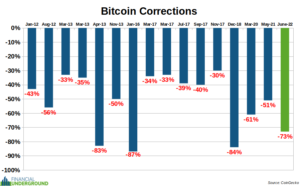 However, if you zoom out and look at the Big Picture, Bitcoin’s volatility has mainly been to the upside over the long term.

Suppose you went back in time four years ago and told someone that Bitcoin “crashed” to $20,000. It would have been so unbelievable that you would probably be laughed out of the room.

As adoption grows and Bitcoin becomes more established as money, the volatility should smooth out—but probably at a much higher price. That’s why you want to buy Bitcoin—and smart speculations that tap into the same trend for even more potential upside—before the rest of the world figures out its superior monetary properties, primarily its total resistance to inflation.

In short, Bitcoin remains incredibly volatile—as it always has been since its inception. But now seems to be an extraordinary buying opportunity.

That’s because there has rarely been a period when the Bitcoin price was lower than it was four years ago.

That’s why the 200-Week Moving Average (200 WMA) is a helpful metric, as it contains nearly four years of price data—around the length of a halving cycle.

Think of the 200 WMA as a floor on the Bitcoin price. Historically it has marked the bottom.

Will it mark the bottom this time too? Nobody knows for sure, but I think it’s a reasonable proposition. As always, though, past performance is not an indication of future results. 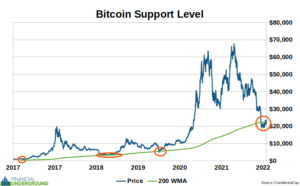 In its history, the Bitcoin price has touched the 200 WMA a few times, and they were fantastic buying opportunities. As we can see in the above chart, it’s a rare occurrence… and now is one of those times.

Editor’s Note: Doug Casey’s forecasts helped investors prepare and profit from: 1) the S&L blowup in the ’80s and ’90s, 2) the 2001 tech stock collapse, 3) the 2008 financial crisis, 4) and now… Doug’s sounding the alarms about a catastrophic event. One he believes could soon strike. To help you prepare and profit, Doug and his team have prepared a special video. Click here to watch now.