What do you do when you see the proverbial storm on the horizon? You stock up on whatever you think you’ll need which you may not be able to secure when the storm hits.

In inflationary periods people stock up because they fear the loss of purchasing power. The problem with this is that at some point you run out of your supplies and you need to replenish them. How do you fix that? Well you need “flow.”

From an investment perspective you may buy a bunch of gold, for example. Then store it in your local government owned bank. Kidding, don’t do that. You store it in your safe or some such secure facility. That gold is great. It is “stock.” You’d use it when you need it, but as soon as you begin using it… well, you have less of it. The next step therefore is to have “flow. For this you’d buy gold mining companies because they represent flow. And we mean producers not some Canadian Venture Exchange listing.

So “stock” is sort of your foundation, if you will. It’s the stuff you hoard and will typically represent most anything absolutely critical that we need: diesel, propane gas, food, medicine, ammunition, copies of Insider — that sort of thing.

Ok, now forget for a minute about us wee little people and consider the above but from a government perspective. They should (if they’ve any sense) do the same thing.

They’d do this because ostensibly at least they work for the people and they are tasked with being good stewards of resources they have control over.

Joe in his wisdom has decided together with the clutch of morons, that in order to help curb the higher oil price they’ll sell oil into the market. This will dampen the price and inflationary pressures.

All good except that this is “stock.”

Depleting stock of critical energy supplies is all good, provided they are simultaneously doing everything in their power to increase “flow.” So what are they doing on the flow side of things? Well, they’re shutting down pipelines, taxing those greedy bastard oil companies, disincentivizing any additional supply.

What else is left?

Western “leaders” believe that the Saudis (and OPEC for that matter) can just turn on the taps and produce more oil or that OPEC is largely responsible for the high oil prices as they are restricting supply.

So can Saudi really increase supply by any meaningful amount for any length of time (6 months or more)? “Perhaps” not.

Aramco, the state-owned Saudi Arabian oil giant, claims it can sustainably pump 12 million barrels a day, well above the kingdom’s OPEC+ August target of 11 million barrels. For the global economy, Saudi spare capacity is the last line of defense against more energy inflation. But apart from a few top company executives and a handful of Saudi royals, no one knows for sure whether Aramco can deliver. The rest either have blind faith in Aramco — or simply don’t believe.

Aramco has only pumped at that level [11 million barrels a day] for a grand total of eight weeks in its entire history, in late 2018 and early 2020. Now, it faces the prospect of sustaining that level or higher, for several months, perhaps even longer, for the rest of 2022 and through 2023. 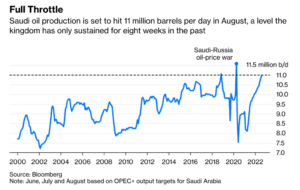 Saudi Arabia has previously gotten above 11 million bpd oil production per day briefly but that was supply of oil rather than actual production (sucking virgin oil out of producing wells rather from storage).

Aramco can pull a few extra levers to deliver, rather than produce, extra crude, maintaining the illusion of higher capacity. The company maintains vast crude storage in Egypt, the Netherlands and Japan, from where it can ship more barrels. In addition, it keeps a strategic reserve of refined products in underground caverns at five locations in the kingdom. It can tap that little-known reserve, which took two decades to build, to supply its domestic market with gasoline, diesel and jet fuel for a while, reducing crude intake at its local refiners and thus freeing more for export. Secretly, that’s precisely what Riyadh did after the attack in 2019 on its large Abqaiq oil-processing center.

How long could the Saudi run at “full bore”? There are mechanical consequences of redlining an engine for extended periods.

Aramco doesn’t just use its spare capacity to meet surges in global oil demand but also, according to the IPO prospectus, to “maintain its production levels during routine field maintenance.” As Riyadh ramps up to maximum sustainable production, Aramco would be forced to run its oil fields at full throttle with little maintenance possible — a recipe for trouble. Any unplanned outages, which in normal times Saudi Arabia can conceal thanks to its spare capacity, would be catastrophic. There would be no cushion.

Regardless of the true potential production number, one thing is clear: the days when Aramco could easily pump more and more barrels are over. From now on, each incremental barrel is a struggle.

Whether or not you have faith in the Saudis, the world faces a reckoning. Reckoning in more ways than one.

We are confident that we will see oil move materially higher over the next few years. But being confident and having the courage to hold on when the market gives you a handbag in the back of your head are two different things.

Editor’s Note: Disturbing economic, political, and social trends are already in motion and now accelerating at breathtaking speed. Most troubling of all, they cannot be stopped.

The risks that lie ahead are too big and dangerous to ignore. That’s why contrarian money manager Chris Macintosh just released the most critical report on these trends, What Happens Next. This free special report explains precisely what’s coming down the pike and what it means for your wealth and well-being. Click here to access it now.

The post Oil at the Crossroads: Belief or Reality? appeared first on Doug Casey's International Man.