Statistica put out this handy chart giving us a visual of the roll out of poverty in Europe.

Without Russian gas, Europe has a shortage of energy, which has led to rising heating bills where the bulk of the costs are borne by households. In the UK alone, one in three households are expected to be pushed into energy poverty this winter.

However, even before the energy crisis began, European households had problems with heating. In the EU in 2021, almost 7% of the population could not properly heat their homes. The country most affected by fuel poverty was Bulgaria, where almost one in four residents (23.7%) were affected last year, followed by Lithuania (22.5%), and Cyprus (19.4%).

The lowest rates were recorded in Switzerland (0.2%) and Norway (0.8%). By contrast, countries in southern Europe saw a higher share of people unable to properly heat their homes in 2021. The European average was 6.9%. When data for 2022 comes out, these figures can be expected to be worse. 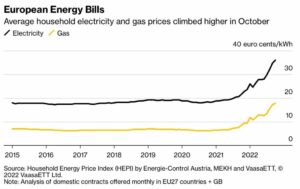 European energy bills hit record despite government support. European households are paying more than ever for electricity and natural gas, even as EU governments have pledged more than €550 billion to “protect citizens and businesses from the energy crisis.” Bloomberg reported.

The average retail price of gas in the European Union and the UK was nearly €0.18 per kilowatt-hour in October, doubling from the same month last year, according to energy consultancy VaasaETT. Household electricity costs have soared 67% to €0.36 per kilowatt-hour.

On a monthly basis, the average unit rate for electricity in October increased by 3.4% and for gas by 2.5%. The biggest monthly gains were in Dublin, where power rates climbed 44%, while the average gas price in Rome soared by 97%.

The unseasonably warm weather in October brought relief to both consumers and governments as fewer people turned on the heating, the publication said. Yet, prices will definitely rise as Europe approaches winter.

The article goes on to say that…

The trade volume between Turkiye and Algeria, which was around $4 billion last year, will expand to $5 billion by the end of the year.

Based on a presidential decree issued in May during Algerian President Abdelmadjid Tebboune’s visit to Turkiye, they target a further expansion to $10 billion as soon as possible, Donmez said.

It’s almost like these guys are investing in fossil fuels. Weird, heh?

Meanwhile, Turkey might have a change of heart on NATO alliance

What was interesting was the reaction of Turkey. Ankara rebuffs US Embassy’s condolences over Taksim bombing according a news sources.

The White House issued a strong condemnation of the violence in Istanbul and expressed heartfelt sympathies to those who lost loved ones.

Commenting on the US’ statement, Soylu said, as cited by the CNN Turk broadcaster,

“We know where the attack was coordinated. We have received the message given to us and we know what that message is. We do not accept condolences from the US Embassy. We are not treacherous to anyone, but we no longer have any tolerance for these insidious acts. The Istiklal street is our child.

Let me do you the favor of explaining in very clear English exactly what this means. It means that Ankara believes the US had a hand in the terror attack conducted on the streets of Istanbul and have now openly stated this.

Well, this is easy. Expect Western narratives to turn increasingly negative towards Turkey. This will begin and likely build. Within a few months’ time, maybe even sooner (the West is now playing whack-a-mole with recalcitrant satellites states getting uppity), we can expect to see calls for “regime change,” while those same media whores who conveniently ignore the war in Yemen, the Uyghurs, and the neo nazis perpetual killing of Russians in the Donbass will conveniently begin pointing to human rights abuses in Turkey (not that there aren’t any taking place — remember, they’re all psychopaths) and so on and so on.

All this will culminate in Turkey leaving NATO — unless they can be brought to heel either by way of a “color revolution” or by economic and military… ahem, pressures being imposed.

Watching the collapse of the empire really is quite something isn’t it.

Editor’s Note: Disturbing economic, political, and social trends are already in motion and now accelerating at breathtaking speed. Most troubling of all, they cannot be stopped.

The risks that lie ahead are too big and dangerous to ignore. That’s why contrarian money manager Chris Macintosh just released the most critical report on these trends, What Happens Next. This free special report explains precisely what’s coming down the pike and what it means for your wealth and well-being. Click here to access it now.

The post Here’s Why The Collapse of the Empire Can Be Quite Entertaining appeared first on Doug Casey's International Man.